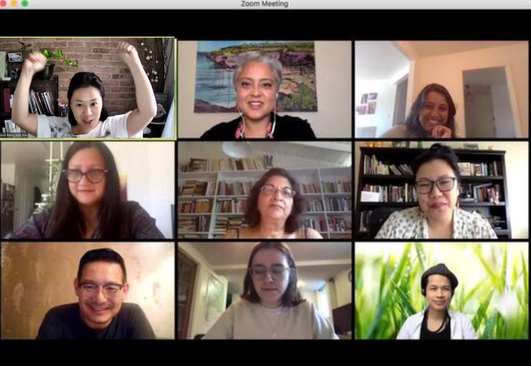 Asian Diasporic Visual Cultures and the Americas is a peer-reviewed journal that features multidisciplinary scholarship on intersections between visual culture studies and the study of Asian diasporas across the Americas. Perspectives on and from North, Central and South America, as well as the Pacific Islands and the Caribbean are presented to encourage the hemispheric transnational study of multiple Americas with diverse indigenous and diasporic populations. The broad conceptualization of the Americas as a complex system of continual movement, migratory flows and cultural exchange, and Asian diaspora as an analytical tool, enables the critical examination of the historically under-represented intersections between and within, Asian Canadian Studies, Asian American Studies, Asian Latin American Studies, Asian Caribbean Studies, and Pacific Island Studies. The journal explores visual culture in all its multifaceted forms, including, but not limited to, visual arts, craft, cinema, film, performing arts, public art, architecture, design, fashion, media, sound, food, networked practices, and popular culture. It recognizes the ways in which diverse systems of visualities, inclusive of sensorial, embodied experience, have shaped and embedded meanings within culturally specific, socio-political and ideological contexts.

Asian Diasporic Visual Cultures and the Americas is dedicated to the critical examination of visual cultural production by and about Asian diasporic communities in the Americas and largely conceived within a globally connected framework. The journal provides an intellectual forum for researchers and educators to showcase, engage and be in dialogue with this growing multidisciplinary area of investigation within the humanities and is published twice annually with one double issue. Along with academic articles, each issue features reviews of a wide range of visual cultural production, including books, films, and exhibitions, as well as full colour artist pages. The journal welcomes transnational and transhistorical as well as site-based scholarly critique and investigation on visual cultures that engage with historical, material, cultural and political contextualizations within current discussions on race, ethnicity, gender, sexuality, dis/ability and class as well as aesthetics, ethics, epistemologies, and technologies of visuality. Transcultural areas of investigation in the humanities, including Asian-Indigenous collaborations, historical formulations of Afro-Asian connections, and studies on transnational subjects of mixed-race heritage, are welcome. In this way, the journal recognizes the critical project of challenging not only the assumed pan-ethnicity of cultural groupings but also the varying degrees of racialized experiences that have been freighted by cultural stereotypes or based on regional identifications, geographical proximity and fixed temporalities.